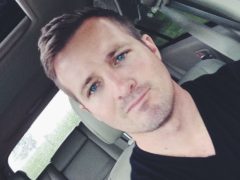 He is a leader in the clogging community, a regular featured instructor at C.L.O.G. national conventions and regional events throughout North America. His troupe, American Racket, has performed throughout the U.S. and in South Korea, Brazil, Canada and Costa Rica. American Racket has shared stages with Bill Cosby, Ted Koppel, Wayne Brady, Sister Hazel, Sugar Ray, Dane Cook and others.

Andy is the director of Sautee Stomp (Helen, GA) and the Florida Clogging Festival.  He is an active performer, judge, instructor and conference presenter.

His professional career focuses on marketing, art direction and public relations for companies including Orlando Opera Company, Orlando Repertory Theatre, the University of Florida College of the Arts, the University of Florida Department of Recreational Sports and (currently) the Georgia Tech Research Corporation in Atlanta. He has taught credit-earning dance courses in tap, clogging and world dance at Florida State University and Santa Fe College, worked as an entertainer at Walt Disney World Resort and has been a regular instructor for the University of Florida’s Dance for Life program which involves researching the impact of movement and dance on people with Parkinson’s Disease and their caregivers. Andy enjoys traveling, performing and outdoor photography, including underwater photography documenting Florida’s extensive network of pristine fresh-water springs. He holds a Group Exercise certification from the
Aerobics and Fitness Association of America (AFAA). He was inducted into the All American Clogging Team in 2002, the Clogging Team of the Decade in 2010, and the Florida Clogging Hall of Fame in 2015